In early 2015, Nikon introduced their smallest and lightest DSLR to date in the form of the Nikon D5500, which combined a very good 24-megapixel APS-C sensor with an articulating touchscreen display. We were very impressed with the entry-level DSLR so when Nikon announced its successor, the D5600, we were interested to see what upgrades Nikon would bring to entry to mid-level market. The answer proved to be something of a mixed bag. The addition of Nikon SnapBridge may be a major upgrade to some but to others, the sharing features aren’t reason enough for upgrading. While there may not be a lot of incentives for D5500 owners to spring for the D5600, for users looking to purchase their first DSLR, the D5600 represents an excellent value and is a great overall performer. Let’s look at how the Nikon D5600 performed in our laboratory and real-world testing.

Considering that the D5600 uses the same imaging pipeline as its predecessor, it should come as no shock that image quality is virtually identical for the two compact Nikon DSLR cameras. However, that’s not a bad thing at all as we praised the D5500 for its excellent image quality.

Considering the D5600 against entry to mid-level DSLR competition from Canon — the Rebel T7i specifically — we find that the D5600 offers a sharper, crisper image thanks in part to its lack of optical low-pass filter and more aggressive sharpening. The Canon might offer better color accuracy, but you’re splitting hairs at that point and both offer pleasing color rendition. As you increase the ISO, the D5600 separates itself even more from its rival, mostly thanks to better default processing. On the topic of high ISO, the D5600 impresses for an APS-C camera, producing a very good 13 x 19 inch print at ISO 1600 and a good 11 x 14 print at ISO 3200. Even at ISO 12,800, the D5600 can make a fine 5 x 7 print, which is admirable for a DSLR within this price range.

When looking at other aspects of image quality, the D5600 continues to impress. Its mean saturation is a bit higher than average and its hue accuracy is near average. Resolution is very high, with the camera producing sharp JPEGs straight from the camera with processed RAW files offering a bit more detail. The in-camera processing is fairly aggressive, though, resulting in some edge-enhancement artifacts but we think it’s a good compromise between sharpness and artifacts for its target audience.

Dynamic range is an area of considerable strength for the Nikon D5600’s 24-megapixel sensor. While we no longer perform our own dynamic range tests, the results at DxOMark for the D5600 shed light on the sensor quality. The overall score of 84 is the same as the score for the flagship DX camera, the Nikon D500. At base ISO, the D5600 offers a very impressive 14 EV of dynamic range, nearly an entire EV above the Canon EOS 80D (the T7i has yet to be tested).

Overall, the Nikon D5600 offers excellent image quality not only for an APS-C camera, but especially for a camera at its price point of around $700 for the body. The 24-megapixel sensor captures sharp images with good resolution across a wide range of ISO speeds and offers very good dynamic range performance, particularly at base ISO. While the D5600’s image quality is virtually identical to that of its predecessor, that’s a good thing in this case as both cameras deliver great imaging performance.

When using the optical viewfinder, the Nikon D5600 uses a phase-detect autofocus system with 39 autofocus points, nine of which are cross-type. While the autofocus points don’t cover a large portion of the frame, the autofocus performance is quick and consistent. Low light autofocus performance is good too, with the camera able to focus unassisted down around -1 EV. With the AF assist light enabled, the camera can focus in complete darkness provided your subject is close enough and there’s enough contrast. During Live View, the D5600’s contrast-detect autofocus is not as fast, although it is still reasonably quick, especially when using an AF-P lens.

The Nikon D5600 does offer improved performance over its predecessor with respect to startup time, autofocus speed and single-shot cycle times, but otherwise it’s fair to expect much of the same. Capable of shooting at around 5 frames per second (4 fps if using 14-bit RAW instead of 12-bit RAW), the D5600 is reasonably quick for this level of DSLR camera. In real-world shooting, the speeds are sufficient for many situations, although sports shooters may want more speed. Buffer depths are an issue when capturing RAW images because RAW buffer depth was tested at 8 and 5 frames for 14-bit RAW and 14-bit RAW + JPEG respectively (shooting 12-bit RAW files will increase those figures). The buffer clears quickly, though, in only a few seconds, so the camera proved agile to shoot despite its shallow buffer depths. For shooters demanding more buffer depth, you can shoot up to a very generous 100 frames in a burst when recording only JPEG images.

Overall, the camera handled and performed well in the lab and for real-world shooting situations. The battery life is particularly impressive, with the D5600 offering an excellent 970 shots when using the viewfinder, which should prove sufficient for most shooting excursions. For photographers looking to use Live View or take advantage of SnapBridge, a second battery might be a good idea as those features can decrease battery life.

Video is not a highlight of the D5600, but the camera does offer good quality HD video recording. The camera can record 1920 x 1080 progressive scan video at up to 60 frames per second, which is in line with its similarly-priced DSLR competition but lagging behind some of its mirrorless competition. A neat and useful feature is the articulating touchscreen, which can be rotated and extended to the side of the camera body, allowing you to record video of yourself while ensuring good framing, which is particularly useful for vloggers.

The touchscreen generally works well during video recording, allowing easy movement of the focus point across the screen. When using an AF-P lens, such as the 18-55mm AF-P kit lens, the D5600 offers quiet and fairly quick autofocus during Live View and video recording. The 10 minute video clip limit for 1080p60 at High Quality and 20 minute limit for 1080p60 at Normal Quality are perhaps a bit of a downside for some (29’59” for all modes is typical and would certainly be better), but the camera does offer a good range of control during video recording and solid overall video performance.

Nikon has been including SnapBridge in nearly all of its recent cameras and SnapBridge functionality is the big new feature for the Nikon D5600. Being able to quickly share images is important for many photographers, so the inclusion of built-in Wi-Fi with Bluetooth is a welcome addition for the D5600. The D5500 offered Wi-Fi too, but SnapBridge functionality via Bluetooth is new. Basically, SnapBridge allows for an always-on Bluetooth connection that can be used to automatically transfer images from your camera to your compatible smart device. There is also remote control functionality available and manual image transferring. While Bluetooth is not a fast way to transfer images, automatic transferring happens in the background so the slow speeds are usually not a big issue.

Like its predecessor, the Nikon D5600 is a small, compact DSLR. You can refer to our Field Test for more hands-on experience, but the main takeaway is that the camera body and its articulating touchscreen display work well in the field and the camera is comfortable to use for extended periods of time. Its optical viewfinder offers approximately 95% frame coverage, which is typical for its class and matches with Nikon’s specifications. If you need 100% coverage, the 3.2-inch touchscreen offers close to 100% coverage, which is very good.

On the topic of the touchscreen display, a neat feature can be utilized after adjusting the default Assign Touch Fn settings in the camera’s menu system — which is quite easy to navigate, by the way. You can use the right half of the touchscreen in its normal position to select the focus point with your thumb when shooting through the optical viewfinder, and the entire screen when the monitor is extended. This feature was available on the Nikon D5500 as well, but Nikon has made some minor improvements in how the touchscreen integrates with the optical viewfinder on the D5600.

Overall, the Nikon D5600 continues in the tradition of the D5500 by being a small, compact and lightweight DSLR with good overall handling and a very good articulating touchscreen display.

The Nikon D5600 is not packed with new features and improvements when compared to its predecessor, but that doesn’t mean that the D5600 is not an impressive camera. Quite the opposite is true, in fact, as there were not a lot of areas where the D5500 struggled compared to its entry to mid-level DSLR competition. The D5600 continues to offer excellent image quality and produces sharp, pleasing images throughout a wide range of situations. The touchscreen display works well and the autofocus performance is even better than before. With the new Nikon SnapBridge functionality, the D5600 is a great option for those looking to quickly share their images on social media. While that new feature may not be a compelling reason for upgrading from the D5500 to the D5600, the Nikon D5600 taken on the whole is an excellent DSLR in the sub-$1,000 category (the most expensive D5600 kit is one with an 18-140mm lens and that comes in at just under $1,000) 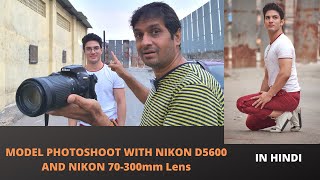 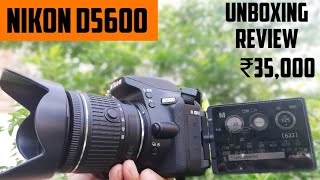 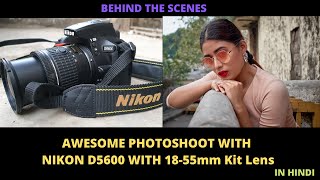 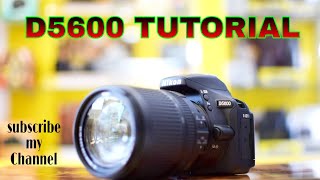 Using the diminutive Nikon D5600 is a world away from shooting with a bulky enthusiast SLR like the D7200 or D500. It’s light and unobtrusive, but its image quality is terrific, and the vari-angle screen makes it supremely versatile. The SnapBridge experience is disappointing, though, but now this camera is three years old and prices have dropped, there are some tempting deals on this DSLR.

PROS
CONS
User Rating: Be the first one!

Most popular this month

Recompare is modern all in one price comparison and review theme with best solutions for affiliate marketing. This demo site is only for demonstration purposes. All images are copyrighted to their respective owners. All content cited is derived from their respective sources.